MENU
MENU CALL US FIND US
You Are Here: Home > 2019 Mercedes-Benz G-Class 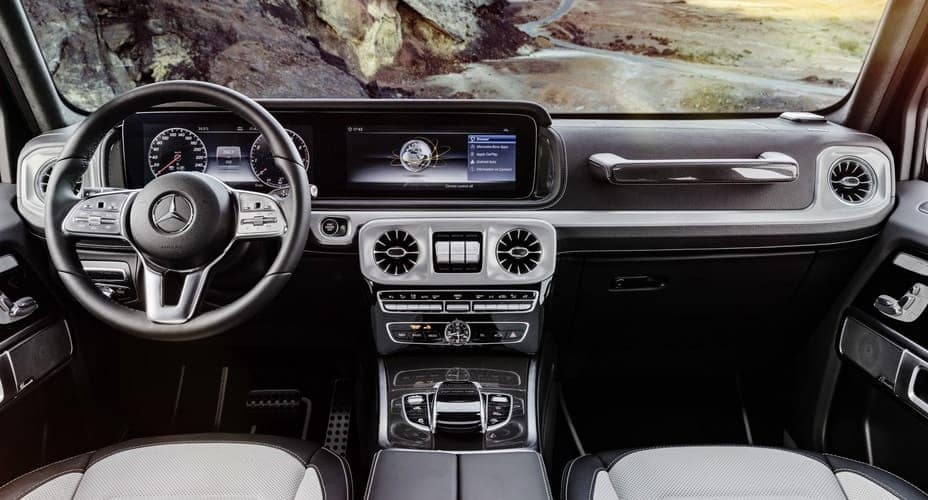 It is an off-road legend and the ultimate benchmark for so many fans of cross-country driving: the G-Class. Since 1979 more than 300,000 vehicles have allowed their owners to experience adventures that would have been unachievable with any other vehicle. Outwardly, the “G” has changed very little. But in fact, this very special off-roader has constantly reinvented itself. With its completely updated interior and numerous new features, the G-Class has now undergone the most significant transformation of its almost 40-year career, in technical as well as stylistic terms – while staying true to itself.

Iconic elements continue to serve very specific purposes, now as then, and to give the G-Class its unique appearance. All these are still to be found in the new G-Class: the distinctive door handles and the characteristic closing sound, the robust exterior protective strip, the exposed spare wheel on the rear door and the prominent indicator lights. It is extraordinary features like these that combine with the off-roader’s angular lines to define its special look.

Interior: as luxurious as it is authentic

That this is a contemporary interpretation of a legend is also evident, for example, from the car’s clear, geometric lines: climbing aboard the G-Class reveals styling elements from the exterior transposed into the interior. The shape of the round headlamps, for instance, which is reflected in the air vents on either side. Or the design of the iconic indicators found again in the shape of the loudspeakers.

Hallmarks of the G-Class include the grab handle in front of the front passenger and the chrome-highlighted switches for the differential locks, positioned in clear view. Both have been meticulously optimized and retained as characteristic features.

G-Class drivers are able to control the full infotainment system without taking their hands off the steering wheel. The touch-sensitive Touch Control Buttons on the steering wheel respond to swiping motions in the same way as the surface of a smartphone. Thanks to haptic impulses and additional feedback from the onboard speakers, the driver can use the touchpad without looking away from the road. The input options are rounded off by shortcut keys in front of the Controller for frequently accessed operating tasks, and by the optional control array for the driving assistance systems above the rotary light switch. The driver sits up close to the windscreen and enjoys good all-around visibility from behind the wheel.

The very clearly laid-out and completely redesigned instrument panel features timeless tube-look analog dials as standard. In other words, fans of classic round instruments will certainly not be disappointed in the new G-Class. As in the new E-Class and S-Class, an alternative instrument panel in the form of a large display screen showing virtual instruments in the driver’s direct field of vision and a central display above the center console is available as an option. Two 12.3-inch displays blend visually into a wide-screen cockpit beneath a shared glass cover. Drivers can choose between three different styles for the displays – “Classic,” “Sport” and “Progressive” – and also configure relevant information and views according to their individual needs. 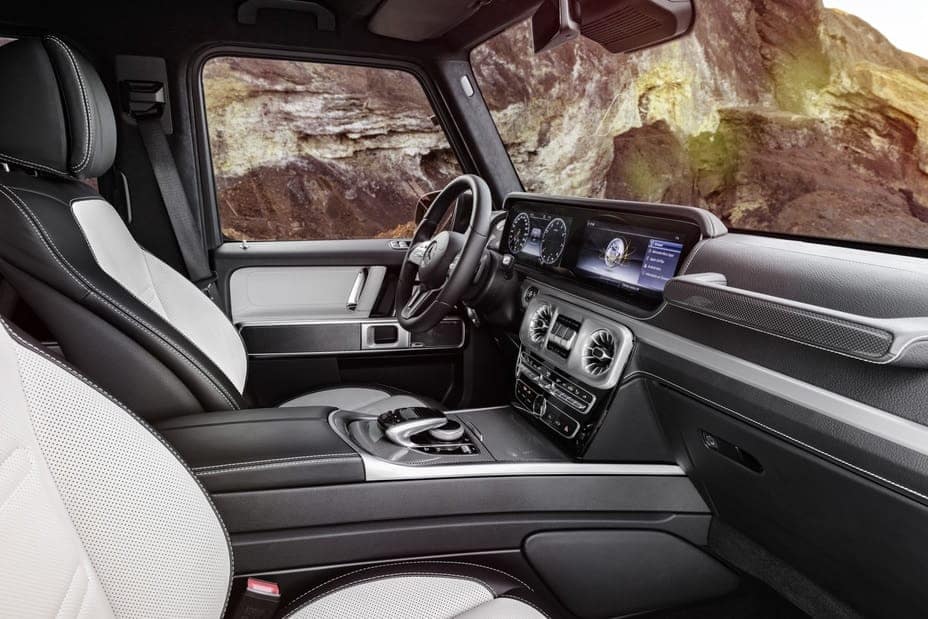 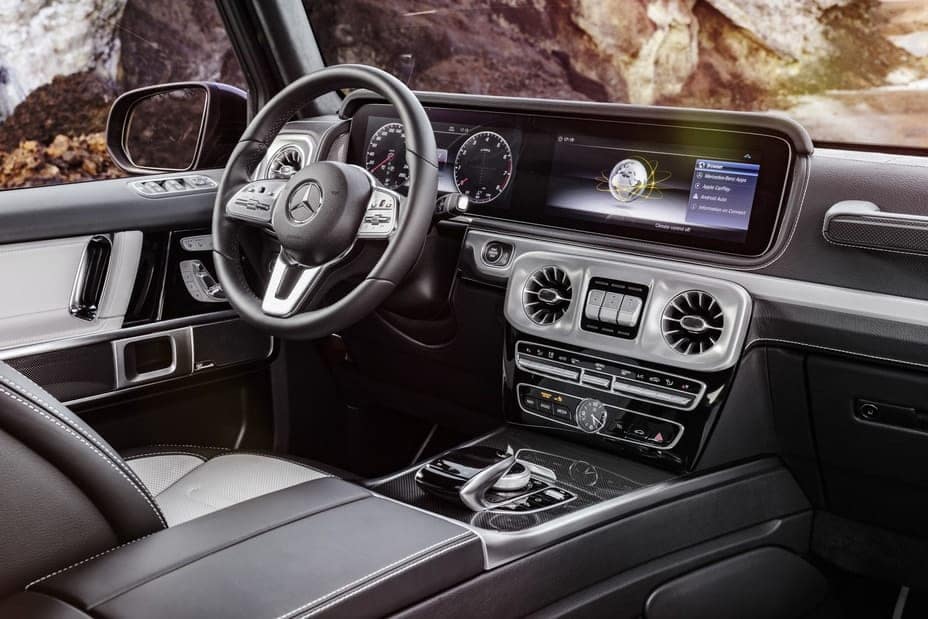 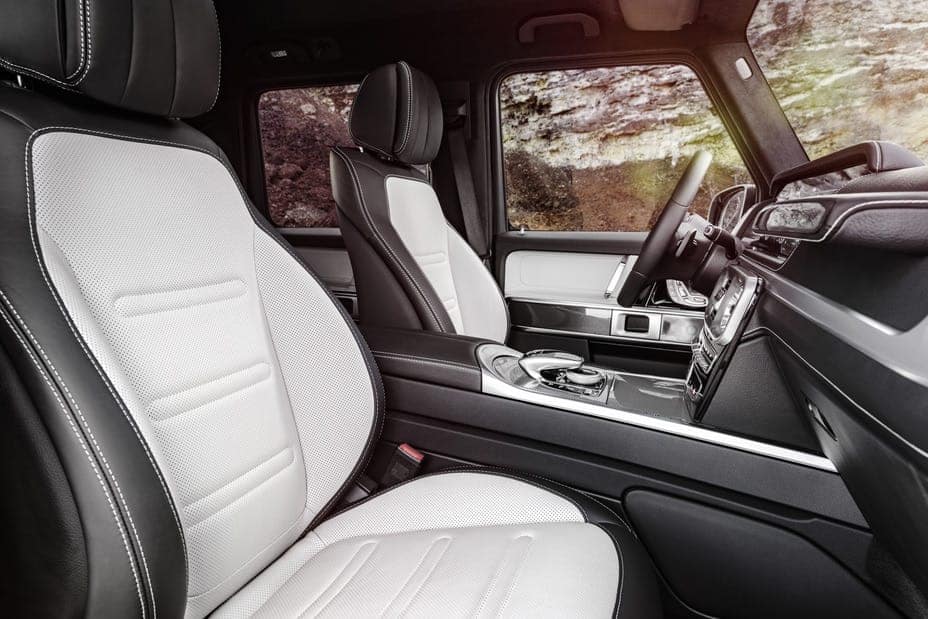 With its unmistakable character and high-quality appointments, the G-Class has always managed to combine off-road capability and luxury in a, particularly harmonious way. Even in its standard specification, the G-Class’s timeless and authentic open-pore wood trim gives it an air of classical elegance. Its stylish details include the generous use of high-quality metal or carbon fiber trim, and its leather seats.

“Every G-Class must be put to the test on the Schöckl.” And this was the motto that headed the list of requirement specifications when it came to redesigning this classic among off-roaders. It refers to the Graz plant’s local mountain, used by Mercedes-Benz for its hard – and some say even merciless – testing, and which each off-roader must be able to conquer. Which is why every “G” bears a certification mark in the form of a “Schöckl” badge at the base of its B-pillar.

The doors are very solid, clear evidence of that hallmark “G” functionality. The stowage space concept has been thoroughly overhauled, with numerous new storage areas ensuring that everything has a home. Under the armrest, for example, is an illuminated compartment for small items. In front of the touchpad in the center console are two removable cup holders. The rear doors are each capable of accommodating a 1-liter water bottle. The rear bench seat has a freestanding backrest, so allowing maximum variability and better visibility through the rear side windows.

The revised dimensions of the now larger G-Class do not only benefit the driver, but also the passengers in the second row.

The rear seats can be folded down to 60, 40 or 100 percent. The seats in the G-Class are equipped as standard with numerous convenience functions such as the Memory function for the driver’s seat, seat heating front and rear, and luxury head restraints in the front. As well as the special multi-contour seats, features range from massage functions, climatized seats, fast seat heating and electrically adjustable lumbar support for the driver and front passenger. The side sections of the seat cushions and backrests of the active multi-contour seats include integrated air chambers that fill or empty on a continuous basis according to the driving dynamics, so providing better support for the seating positions of driver and front passenger and, for example, offering more lateral support during cornering. The front seats of the Active Multicontour Seat package are recommended by experts from the German spinal health organization “Aktion Gesunder Rücken e.V.”.

There are so many variants for the new G-Class that it is extremely rare for any two cars to be exactly alike. This wide range of equipment options is made possible by the fact that features from the designo® manufaktur range have already been integrated into the standard equipment variants.

Passengers are accommodated on seats in Lugano leather in Black, Nut Brown or Macchiato Beige. There is furthermore a choice of two top-class equipment packages: Exclusive Interior and Exclusive Interior Plus. The Exclusive Interior is available in a range of seven colors. Three of these are elegant combinations of nappa leather in black and one of the designo® manufaktur colors Platinum White, Yacht Blue or Classic Red. The package also includes a black designo® roof liner in DINAMICA microfiber, along with air vents in silver shadow. The Exclusive Interior Plus comprises additional elements in Nappa leather such as the door trim, sections of the center console, the instrument panel and all the upholstery. A particular feature here is the seat design with dynamic diamond- pattern quilting. With this package, customers have a choice between the designo® shades of Black, Espresso Brown and Classic Red. For the first time, it is also possible to order a light-colored interior throughout, in Macchiato Beige – encompassing everything from the flooring to the roof liner.

The G-Class is the top model among luxury off-road vehicles. It is not only by far the passenger car model series with the longest production run in the history of Mercedes-Benz, but also the forefather of all SUVs to bear the three-pointed star – this is why all Mercedes-Benz off-road models feature the upper-case G in their name.

What began in 1972 with a collaboration agreement between the then Daimler- Benz AG and Steyr-Daimler-Puch in the Austrian city of Graz is now a story peppered with superlatives and significant milestones. As it was back then, the G-Class is still built largely by hand in Graz.

Right from the very first design, this was no ordinary cross-country vehicle. Product planners, designers and engineers designed a vehicle that offered a compelling combination of reliability, robust build and superb off-road performance, which nevertheless appealed to customers as a fully-fledged, comfortable and, above all, safe, exclusive automobile for recreational purposes.

At the time of its market launch, in the spring of 1979, it was available with a choice of four engine variants covering a performance spectrum of 53 kW / 72 hp to 115 kW / 156 hp. Customers had the option of a Cabriolet with a short wheelbase or Station Wagon models with short or long wheelbase. In 1989, the vehicles in the model series 463 marked the beginning of an evolutionary process for the off-roader that was not just about keeping pace with technical progress. It was an evolution that also brought a steadily expanding fanbase and emphasized its character as an exclusive vehicle for any occasion. And, since 1993, a vehicle with an official name: the G-Class.

The 25th anniversary of the G-Class was marked by the arrival of a very special model on the market, honed by Mercedes-AMG®: the G 55 AMG® Kompressor. Its eight-cylinder power unit (350 kW / 476 hp, 700 newton meters of torque) gave the robust off-roader an unprecedented level of performance and demonstrated the tremendous potential of the G-Class.

The G-Class’s 30th birthday was celebrated in 2009 with a series of new equipment features, enhancing primarily the comfort and exclusivity of the interior. The ergonomically optimized front seats offered more support, while new designs and climatized seats made the veteran beast even more luxurious. Sales of the G-Class have increased continually ever since. Thanks to the strong growth rates, the forefather of the SUV achieved a new sales record in 2016, with almost 20,000 units being sold within a year.

New AMG® engines, a markedly expanded range of appointments, an even higher-quality interior, careful exterior modifications and safety features such as DISTRONIC® Plus as well as the parking aid PARKTRONIC ensured further enhancement of the off-roader in 2012. A year later, Mercedes-Benz expanded the product portfolio with the G 63 AMG® 6×6: a three-axle off-road vehicle that combined the “best of three worlds”, featuring as it did all the developments of the new G-Class generation, the robustness of heavy off-highway vehicles and the superior engine technology of Mercedes-AMG®.

The G 550 4×4² added not only a luxurious interior to the equation, but also ground clearance of 45 centimeters and impressive on-road performance. Since 2015 designo® manufaktur has offered customers the possibility to individualize their G with exclusive equipment variants. The extraordinary G 650 Landaulet made its own very special mark in 2017. It was the first of its type to emerge under the Mercedes-Maybach name and only 99 vehicles were built. With its superlative V12 engine, portal axles, electrically operated fabric top and exclusive equipment specification in the rear compartment, this variant of the “G” was aimed at customers who want their open-top driving to be as exclusive as it is stylish.

The summer of 2017 saw the 300,000th G-Class roll off the assembly line in Graz – a Mercedes-Benz G 500 in designo® Mauritius Blue Metallic with black leather seats and contrasting white topstitching. Equipped with a range of off-road features including all-terrain tires mounted on black 16-inch rims and a sturdy roof rack, the anniversary vehicle embarked this summer on a new adventure. G-Class fans around the world determined the vehicle specification by voting for their favorite equipment and appointments on the official
G-Class Facebook page. The future road trips of the 300,000th G-Class can also be followed on social networks.

The new G-Class will be celebrating its world premiere at the 2018 North American International Auto Show in Detroit and will go on sale in the U.S. by late 2018.

Please note this information is preliminary; additional information will be provided at the time of the product reveal in January.